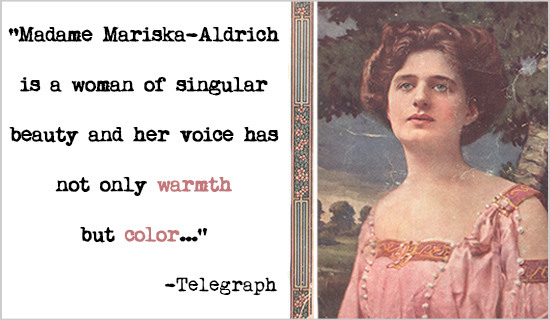 About the Aldrich Archive

Named after the early 20th century American opera star Mariska Aldrich, this archive contains over 25,000 commercial, out-of-print, and historical recordings; operatic scores and sheet music; periodicals and books about music; and historical photos and ephemera. During her careers, Madame Aldrich began collecting operatic memorabilia and audio recordings. Her daughter, Anna Mary Aldrich (Meeka) and her husband, Rick Anderson, continued caring for and adding to her mother’s collection, expanding it to its current size. In 1998, after their deaths, the Aldrich Foundation gifted the collection to the University of Utah.

To arrange a visit to the Aldrich Archive, please contact us.

Mariska Aldrich (1881-1965) was an American dramatic soprano singer and actress, born in Boston, Massachusetts. She made her operatic debut at the Manhattan Opera House in 1908 in Meyerbeer’s Les Huguenots. Mariska was the first American-born soprano to become a star with the Metropolitan Opera and the first American to sing all three Brünnhildes of Wagner’s Ring in Germany. After years of singing in Europe and the United States, Madame Aldrich settled in Los Angeles, coaching singers and teaching voice.

Of great beauty, with a figure both commanding and handsome, she exhibited a voice that is bound to leave an impression on New York music lovers. It has grace, range, volume of tone and wonderful beauty.”


Please check back for updates.