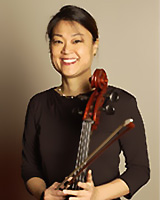 Pegsoon Whang has been a member of the Utah Symphony for the last fifteen years and is a faculty member at Westminster College and the University of Utah. Prior to joining the Utah Symphony, she held the principal position in Colorado Music Festival for five seasons. She received a bachelor's degree from the Curtis Institute of Music and a master's degree from the Mannes College of Music, where she finished with the Most Outstanding Graduating Student award. Her mentors include Robert Marsh, David Soyer and Timothy Eddy. She has appeared in numerous festivals and performed in orchestras and chamber ensembles throughout the United States, Europe and Asia.

Miss Whang’s students hold positions in orchestras such as New York Philharmonic and have been winners in international competitions including a laureate in Tchaikovsky Competition.