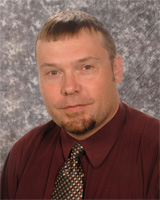 Michael Chikinda, Associate Professor (Lecturer) Music Theory, completed his dissertation at the University at Buffalo, SUNY under the direction of Dr. Martha Hyde. His research focused on the early twelve-tone works of the Italian composer Luigi Dallapiccola and examined the unique compositional practices of this period in the context of the Irredentist movement and the nineteenth-century ideal of the fragment.

His research interests also include the music of Alexandre Scriabin and, most recently, the music of Arvo Pärt. Dr. Chikinda will be presenting his paper "Pärt's Evolving Tintinnabuli Technique' at the upcoming 'Arvo Pärt: Soundtrack of an Age' conference in London. Chikinda has taught at the University at Buffalo, the University of Guelph (Guelph, Ontario), Dalhousie University (Halifax, Nova Scotia) and Queen's University (Kingston, Ontario). He has presented his research at scholarly conferences in both North America and Europe.

“Schubert and the Missing Thematic Reprise: Innovation or Subversion?” presented at the Rocky Mountain Chapter of the Society for Music Theory at the University of Northern Colorado, March 30-31, 2012.

“Discerning Schubert's Innovative Use of Form in the Third Variation of Impromptu Op. 142, No. 3,” at the Thanatos as Muse? Schubert and Concepts of Late Style Symposium hosted by the National University of Ireland Maynooth, October 21-23, 2011.