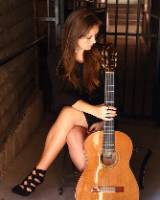 Sophie Stanley (born in 1993 in Utah, USA) is a classical guitarist known for her “bright sound and vibrant energy”. Sophie has played the classical guitar since the age of 6 when she first heard the Dixie Chicks and “just had to play.” Since then, she has delved deeply into the classical guitar universe, working with renowned players from around the world including David Russell, Grisha Goryachev, Benjamin Verdery, and Ana Vidovic.

Sophie has played in various venues throughout the United States and in Eastern and Northern Spain where she spent the better part of two wonderful years and where her love of the rhythm and emotion of Latin American and Spanish music was solidified. Sophie won top prizes in the Utah Symphony Youth Guild Recital, performed several Lobby Fests for the Utah Symphony, and won the Concerto Night Competition at Weber State University playing the famous Fantasia para un gentilhombre by Rodrigo. She graduated magna cum laude with her B.A. in Instrumental Performance from Weber State University in 2015 and her M.M. in Music Performance from New England Conservatory in 2018, where she studied under the virtuoso Belgian guitarist, Dr. Jerome Mouffe, as well as Eliot Fisk.

Sophie loves practicing and performing on her beloved Cervantes guitar "Rodrigo Cervantes Montoya". She has won amateur writing contests, and loves to read, bake, and frequently adds to her massive embroidered shoe collection.