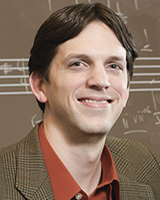 The music of Luke Dahn has been called "terrific, awfully good" (Sequenza 21) and "blessed with a vigorous rhythmic sense" (Fanfare), and has been performed by groups such as the Moscow Conservatory Studio for New Music, Composers Inc., the NODUS Ensemble, the League of Composers Chamber Players, the NEXTET Ensemble, the University of Iowa Center for New Music, New Music New Mexico, violinist Wolfgang David and saxophonist Kenneth Tse. Venues have included Carnegie Hall (NY), Rachmaninoff Hall (Moscow), the Estonia Academy of Music (Tallinn), the Frankfurter KuenstlerKlub, Harvard University’s Memorial Church, the Miami ISCM Festival Series and the N.E.O.N. (Nevada Encounters of New Music) Festival at which he was awarded the Max Di Julio Prize. Dahn has also been the recipient of other recent awards including the 2014 J.D. Robb International Composition Prize. His music is featured on several Albany label recordings.
Dahn earned graduate degrees in composition from the University of Iowa and Western Michigan University, and his principal teachers have included David Gompper, C. Curtis-Smith, and Ann Gebuhr. After serving eight years at Northwestern College (IA), Dahn joined the University of Utah in 2015. In addition, he is co–founder and co–artistic director of Ensemble Périphérie and also serves on the Board of Directors of the League of Composers/ISCM.