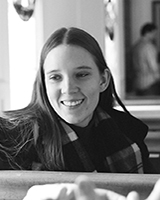 I am a cultural musicologist with a strong background in interdisciplinary topics and methodologies. My research examines the cultural and social contexts for music in Europe in the fifteenth and sixteenth centuries. My work is motivated by a desire to illuminate the networks that generated and promoted musical knowledge and practices beyond the currently recognized composers and musical creators. My diverse research areas, from music in the visual arts to music associated with women’s rituals to self-reference in music, are unified by the idea of musical community.

My first monograph examines a repertoire of mostly Latin-texted music from the decades around 1500 that include references to music or musicians. Composing Community in Late Medieval Music: Self-Reference, Pedagogy and Practice frames these musical works through similar expressions of self-reference by communities of visual artists and considers anonymous compositions alongside those of Josquin and other well-known composers. Reviewers commend the book’s readability and accessibility to “scholars and students in the wider fields of medieval and early modern studies” while also recommending my approach as a “stepping-stone… to continue forging connections between music and other late medieval forms of cultural, religious and artistic expression” (JAMS 74, 445; Notes 77, 601).

I recently collaborated with David Rothenberg to co-edit an interdisciplinary volume of the journal Early Music, bringing together the work of musicologists and art historians on intersections between the sights and sounds of early modern memorials and commemorative activities. My latest research project seeks to reunite visual representations of female musicians from early-sixteenth century Europe with the repertoires, practices, and communities of women who lived in the same environments and cultural circles as these images.