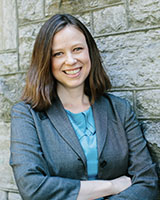 Elizabeth Titrington Craft is an Assistant Professor in the School of Music at the University of Utah. Her research crosses disciplinary boundaries to explore how music conveys sociopolitical values and constructs national identity, focusing especially on musical theater from the early twentieth century through the present. Her recent publications examine the politics and reception of the musical Hamilton (in the journal American Music), the George M. Cohan biopic Yankee Doodle Dandy (in The Oxford Handbook of Musical Theatre Screen Adaptations), and the musicals of Lin-Manuel Miranda (in The Routledge Companion to the Contemporary Musical). Her work also appears in the journal Studies in Musical Theatre and the volumes The Critical Companion to the American Stage Musical and Crosscurrents: American and European Music in Interaction, 1900–2000. She is currently working on a book on the Broadway musicals and cultural impact of the composer, playwright, actor, director, and producer George M. Cohan.

Dr. Craft serves as the Honors Faculty Advisor for the School of Music and as co-chair, with McKay Music Library Director Lisa Chaufty, of the School of Music’s Student Success, Equity, Diversity, Inclusion and Library Committee.

“‘Can We ‘Leave Behind the World We Know’? Exploring Race and Ethnicity in the Musicals of Lin-Manuel Miranda.” In The Routledge Companion to the Contemporary Musical, ed. Sternfeld and Wollman. New York: Routledge, 2019.

“Headfirst into an Abyss: The Politics and Political Reception of Hamilton.” Special issue: Hamilton. American Music 36, no. 4 (2018).

“‘Is This What It Takes Just to Make It to Broadway?!’: Marketing In the Heights in the Twenty-First Century.” Special Issue: “A Mark, a Yen, a Buck, or a Pound: Money and the Stage Musical at the Millennium.” Studies in Musical Theatre 5, no. 1 (2011).