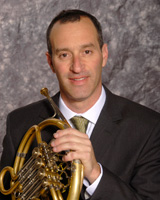 Stephen Proser has served as fourth horn of the Utah Symphony Orchestra since 1992. Born in Pennsylvania and raised in Connecticut, Argentina and England, Mr. Proser began his study of the horn at the age of nine under the tutelage of his cousin, Raul Maestro, a professional hornist in Argentina. Returning to the United States, he continued his studies with Andrew Spearman of the Hartford Symphony Orchestra. During the school year of 1977-78, Mr. Proser was a student of James Brown of the London Symphony Orchestra at the Royal Academy of Music in London, England.

Mr. Proser completed his undergraduate studies at the Peabody Conservatory of Music in Baltimore, where he was a student of David Bakkegard. Studies with Dale Clevenger of the Chicago Symphony Orchestra and a M.M. at Northwestern University followed.

Stephen Proser also serves on the faculty of the School of Music at the University of Utah, where he maintains a large and active teaching studio. In addition to that, he is a frequent guest as a chamber musician in Salt Lake City for the Nova, Intermezzo Chamber Music Series and with University of Utah Faculty Chamber Musicians.

Mr. Proser has also performed with the Chicago Symphony, Milwaukee Symphony, Columbus Symphony and at the Grand Teton Festival, among others. He has also recorded extensively for film and television, having played on soundtracks for all of the major motion picture studios and television networks.

Stephen lives in Salt Lake City with his wife Susan Kohler, his children Matthias and Helena, Coca the dog and two rabbits.