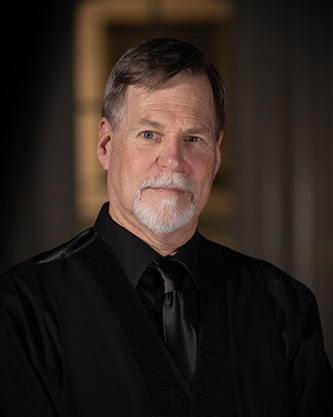 Robert Baldwin is Director of Orchestras and Professor of Conducting at the University of Utah, and Music Director and Conductor for the Salt Lake Symphony.  He is also the founding conductor for Sinfonia Salt Lake, a professional chamber orchestra that made its critically acclaimed debut in 2016. In 2019, he was appointed to an adjunct position at the Wuhan University Center for the Arts in Wuhan, China.

Dr. Baldwin has appeared across the North America, Europe and Asia as a conductor and performer on viola and viola d’amore. International conducting appearances include the Hunan Symphony and Wuhan University Orchestras in China, Busan Maru International Music Festival in South Korea, Eutin Festspiele in Germany, Kuopio Academy of Music in Finland, and the Hermitage Camerata in Saint Petersburg, Russia, and tours with the University of Utah Chamber Orchestra to London, Vienna, Graz and Salzburg. In demand as a guest conductor and clinician, he also has conducted performances with the Utah Arts Festival, Great Falls Symphony, Lafayette Symphony, Lexington Philharmonic, Lexington Singers, Flagstaff Festival of the Arts, Abilene Tri-Collegiate Opera, and numerous All-State and regional festival orchestras across the U.S.A.  His performances and ensembles have received international attention and have been featured on New York’s WQXR Classical Radio, and nationally broadcast radio programs, including Performance Today, Highway 89 and Weekend Edition.  Dr. Baldwin’s preconcert talks and community music classes are popular mainstays of the Utah Arts scene.  His award-winning blog on music and creativity, Before the Downbeat, can be viewed at: http://beforethedownbeat.wordpress.com/

Also an accomplished violist and viola d’amore player, he has had a variety of experiences, including guest appearances with the Amadeus Trio, and both the Saint Petersburg and Stanford String Quartets, as well as at the Sedona Chamber Music Festival, SMU Music Festival and Park City International Music Festival. He was violist of the Arizona-based Coconino Chamber Ensemble from 1989-1999, and was principal violist for the Flagstaff Symphony, Arkansas Symphony, and Arizona Opera.  Solo and chamber appearances on viola and viola d’amore include recitals and concertos in the United States, Germany and Mexico.

Previously, he has held faculty and conducting positions at the University of Kentucky, Lexington Philharmonic, New American Symphony, Flagstaff Symphony and Northern Arizona University. Dr. Baldwin studied conducting in the United States and in Saint Petersburg, Russia, holding degrees in viola performance from the University of Northern Colorado and the University of Iowa, and a DMA in orchestral conducting from the University of Arizona. He makes his home in Salt Lake City, Utah where, in his spare time, he enjoys reading, writing, hiking, and spending time with his family. He is a published poet as well, his works appearing in recent issues of Utah Life, Grey Sparrow Journal, Haiku Journal and Poetry Quarterly. Thirty, his first chapbook of poetry, will be published in 2022.