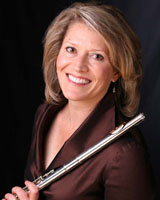 Lisa Byrnes is currently Associate Principal Flute with the Utah Symphony where she has played since 2000.  For the 2011-2012 season, she was Acting Principal Flute. A native of Northern California, Ms. Byrnes studied at the Eastman School of Music and graduated with degrees from the Curtis Institute of Music and the San Francisco Conservatory of Music. Her primary teachers were Julius Baker, Jefferey Khaner and Timothy Day.

Prior to playing with the Utah Symphony, Ms. Byrnes played with the New World Symphony under the direction of Michael Tilson-Thomas. She also played Principal Flute with the San Francisco Opera's Western Opera Theater as well as the Sarasota Opera Company. She has performed in several music festivals including Tanglewood, the National Repertory Orchestra, the Chatauqua Music Festival, the International Music Festival in Evian, France, the Edinburgh International Music Festival,  the Lake Tahoe Music Festival and the Bear Valley Music Festival. She has appeared as a concert soloist performing works by Mozart, Ibert, Nielsen, Dubois, Rivier, Bloch, Vivaldi and Bach. She has also appeared as guest solosit with the Utah Symphony performing the Bach B Minor Suite and the Bach Brandenburg Concerto #4.

Ms. Byrnes completed tours to Japan, South America, and Europe with several orchestras, and she traveled extensively with tours of "West Side Story" and "My Fair Lady". Ms. Byrnes currently serves on the faculty of the University of Utah and she has been on the faculty of the Humboldt State University Sequoia Chamber Music Workshop since 1994.  She has been a guest faculty artist at the Northern California Flute Camp, and she has also taught at Brigham Young University. She has enjoyed an active chamber music life performing with groups such as The Left Coast Ensemble, Alternate Currents, Nova, Intermezzo and Three Fish and a Scorpion.