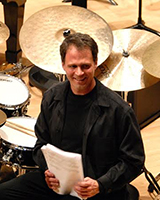 Kelly Wallis is an extremely experienced and versatile performer in the Salt Lake and Intermountain Region having received a Bachelor of Music degree in percussion performance from the University of Utah under the tutelage of percussionist Douglas J. Wolf and composer Henry Wolking. Upon graduation from the U of U, Kelly went on to be regarded as a “first call” drummer percussionist in Salt Lake’s musical community. He continued his private studies with such notables as Ed Soph, Walfredo De Los Reyes Sr., Michael Spiro, Tom Brechtlien, Steve Houghton, and Dom Famularo. He is equally at home in a variety of musical styles ranging from jazz, rock, fusion, funk, Latin, country and classical, and on a variety of instruments ranging from drum-set, world/ethnic percussion, orchestral percussion.

Kelly’s musical has proven his versatility through his performance and recording credentials. As a Classical Percussionist, he has performed with the Utah Symphony, Utah Opera, Ballet West, Repertory Dance Theatre, Utah Chamber Artists and Contemporary Music Consortium and was the house percussionist for Pioneer Theatre Company for seventeen years (Utah’s only equity theatre).

Along with his busy performing schedule, Kelly also keeps a very active private teaching schedule. In 1993, Kelly published his first drum text “The Rhythm Concept” to rave reviews from Modern Drummer and The Percussive Arts Society. He has since sold through three printings of the Rhythm Concept. Having over twenty-five years teaching experience, Kelly currently serves on the percussion faculty at the University of Utah and Westminster College. As an endorser for Yamaha Drums and Sabian Cymbals, Kelly is in high demand as a clinician and adjudicator throughout the Intermountain West.