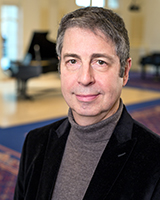 John Costa received his DMA from The University of Michigan (1994) where he has been a recipient of the Regents Fellowship, The Christine Rinaldo Memorial Scholarship, and The Eugene & Sayde Power Fellowship in The Performing Arts. His teachers have included Fred Lerdahl, Michael Daugherty, George Balch Wilson, William Albright, Eugene Kurtz, and William Bolcom.

He has been a Fellow at The Composers Conference at Wellesley College, The Festival at Sandpoint under Gunther Schuller, The Tanglewood Music Center, and The Charles Ives Center for American Music. He was winner of the Georges Enesco International Competition and recipient of the Charles E. Ives Scholarship given by The American Academy of Arts & Letters. He was also the winner of the 2016 North Carolina New Music Initiative Orchestral Composition Competition; the 2018 Music Now Contest at Indiana State University; and the 2018 Washington and Lee University Wind Ensemble Composition Contest.

His orchestral works have been performed by the Utah Symphony, the Utah Youth Symphony, The Memphis Symphony, the Cleveland Chamber Symphony, and The Spoleto Festival by the Charleston Symphony Orchestra. His chamber works have seen numerous performances throughout the US.

He was a recipient of two artist’s grants from the Utah Arts Council and has received commissions from the Prism Saxophone Quartet, the Phantom Arts Ensemble for New Music, the Utah Youth Symphony, the Nova Chamber Music Series (3), the Barlow Foundation, the Cleveland Chamber Symphony, saxophonist João Pedro Silva, and the Utah Arts Festival for the Utah Symphony Orchestra. He participated in the American Composers Forum’s Orchestral Reading Project with the Plymouth Music Series Orchestra in Minneapolis. He was also a recipient of the Norton Stevens fellowship at the MacDowell Artist’s Colony.

John Costa is a Professor/Lecturer at The University of Utah and is published by Frank E. Warren Music Service of Boston and AVA Musical Editions in Lisbon, Portugal. He has chaired the Board of Directors for the Utah Arts Festival (2007/8) and is producer/coordinator of the Utah Arts Festival’s National Composer Commissioning Program. In addition to his composing, he has also written a text, A History of Rock ‘n’ Roll: 12th Edition that is published through Pearson Learning Solutions.