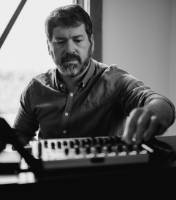 MFA California Institute of the Arts

Commercially, he has recorded with record labels including 4AD, Polyvinyl, Parlophone, Cantaloupe Records, and Mode and can be heard on music for TV, film, and video games including Grand Theft Auto IV, The Independent Film Channel, Grey’s Anatomy, and BBC.

In addition to composing and performing, Maxwell co-founded the LoudLouderLoudest Music Production Company in Brooklyn, NY, and was responsible for many firsts in wireless music and mobile game sound for clients such as Sony, Warner Music Group, Universal Music Group, Atlantic Records, HBO and Disney. While in New York, he also co-founded Listen/Space, a venue for new music which now exists as a music commissioning organization located in Park City, Utah.  He is also the founder of the VU Symposium for Experimental, Electronic and Improvised Music in Park City, founder and director of the Utah Youth Orchestras and Ensemble’s Young Composers Project.

Maxwell is a graduate of University of Cincinnati College-Conservatory of Music, California Institute of the Arts, and the University of Utah School of Music. His creative work is published by Good Child Music New York and Éditions musique SISYPHE.