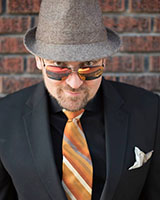 Halliday is a four-time winner of the Outstanding Tenor Saxophone soloist award at the Lionel Hampton Jazz Festival and a winner of the Outstanding College Musician award at the Reno Jazz Festival. He holds a BM in Saxophone Performance with an Emphasis in Jazz Studies from BYU and an MM in Jazz Performance and Composition from the University of Utah. Halliday serves as Associate Adjunct Professor of Saxophone at the University of Utah, private saxophone instructor, Survey of Jazz professor, and director of the Westminster College Jazz Ensemble, and is an adjunct faculty member at Salt Lake Community College. His latest CD Dreamsville appears on KUER 90.1 FM’s “Top 12 of 2012.” His next release The New Orleans Project is a CD of original New Orleans-style funk that was recorded at Ani Difranco and her husband Mike Napolitano’s Big Blue studio in New Orleans and features legendary New Orleans drummer Stanton Moore, San Francisco-based organist Wil Blades, and Utah’s own Corey Christiansen.