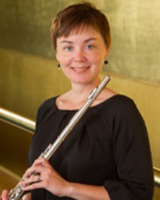 Caitlyn Valovick Moore holds the title of Piccolo/Flute for the Utah Symphony, and was Acting Associate Principal Flute for the 2011-2012 season. A native of northern Michigan, she attended her final two years of high school at Interlochen Arts Academy and went on to receive her Bachelor of Music from DePaul University, and her Master of Music from Northwestern University. Caitlyn’s primary teachers were Walfrid Kujala and Mary Stolper. She has also performed in master classes for William Bennett.

Prior to her Utah Symphony appointment, Caitlyn was a member of the Virginia Symphony Orchestra and the Civic Orchestra of Chicago, and she has also performed with the Grand Teton Music Festival Orchestra. She has appeared as a soloist with the Virginia Symphony Orchestra and won second prize in the National Flute Association's 2004 Piccolo Artist Competition. Locally, she has performed chamber music with both the Nova and Intermezzo Chamber Music series. She is an adjunct professor of flute at the University of Utah and also teaches privately. Caitlyn shares her home with her husband, Craig Moore, a bass trombonist, and their two Labrador Retrievers, Samantha and Milo.