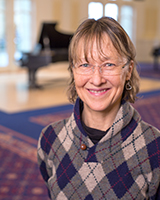 Barbara Scowcroft is in her 24th season as a member of the first violin section of the Utah Symphony Orchestra and served as an acting Assistant Concertmaster in the 1998-1999 Season.

In 1996 Ms. Scowcroft became the Music Director and Conductor of the Utah Youth Symphony. The orchestra was invited to participate in the Cultural Olympiad for the 2002 Winter Olympic Games in Salt Lake City and she augmented the orchestra of 135 Utahns creating an International Youth Orchestra of 170 musicians representing 12 countries and 5 continents.

Ms. Scowcroft was Music Director and General Manager of the NOVA Chamber Music Series from 1986-2004 receiving the Governor’s Award in the Arts for that organization in 1999. She was Music Director and Conductor for Vivaldi Candlelight Concerts from 1997-2004. She performs annually in the Grand Teton Music Festival Orchestra and recently conducted works for large ensemble on their chamber music series. Since 2000 she has been a Guest Conductor in Houston, Texas at the American Festival for the Arts and was recently appointed Resident Conductor. In April 2006, Ms. Scowcroft made her debut as the first woman conductor of the Salt Lake Symphony and received positive reviews for her musical interpretation. She is an Adjunct Associate Professor at the University of Utah. In high school, Ms. Scowcroft was a member of the Chicago Youth Symphony Orchestra. As a college freshman, she performed the first movement of the d minor Wieniaski violin concerto with the Utah Symphony on "Salute to Youth."

Ms. Scowcroft studied at the Mozarteum in Salzburg Austria and the North Carolina School of the Arts. She received her B.A. in Violin Performance and Masters of Music of Conducting from the University of Utah.

In 1992 Ms. Scowcroft received Salt Lake City’s first Mayor’s Award in the Arts, in 2003 received O.C. Tanner’s "Everyday Hero" Award for her contributions to Utah non-profit organizations, and in 2004 was selected by the National Association of Women Business Owners, Utah Business Magazine, and the Salt Lake Chamber of Commerce as one of thirty "Visionary Women of Utah."