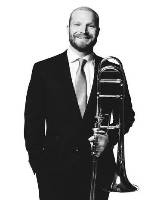 Mark Davidson began playing the trombone at age 11 within the Plano, Texas school district music programs before attending the University of North Texas, where he received a Bachelor’s of Music Education in 2006. During his studies, Mark was a student of Jan Kagarice and Tony Baker, and received the Most Outstanding Undergraduate Award while studying at UNT. After graduation, he went on to attend The Juilliard School and studied with Joseph Alessi, Principal Trombone of the New York Philharmonic. During this time, Mark also attended the Pacific Music Festival in Sapporo, Japan and was the winner of the International Trombone Association’s Lewis Van Haney Tenor Trombone Competition.

Mark Davidson currently serves on the faculty at the University of Utah, where he teaches trombone students as well as an orchestral performance practicum techniques course. As a clinician for S.E. Shires, he has also presented masterclasses and recitals throughout the country as well as in Asia, Europe, and Australia. In 2018, Mark was humbled to be chosen as soloist with the United States “Pershing’s Own” Army Orchestra for the American Trombone Workshop. In 2019, the University of North Texas Wind Ensemble released “Fiestas” which features Mark with his alma mater performing “Red Sky” by Anthony Barfield under the Mark Records label.

With a strong passion for the advancement of music education and music performance in Utah, Mark founded the Mountain West Trombone Workshop in 2015, an annual event that brings trombonists from around the country to Utah with the mission of engaging, transforming and inspiring trombonists’ of all ages.