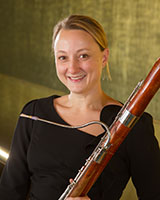 Jennifer Rhodes was appointed to the position of Second Bassoon of the Utah Symphony | Utah Opera by Maestro Thierry Fischer in 2012. Previously she held the position of Principal Bassoon with the Memphis Symphony Orchestra and appeared as soloist with the group in 2007. Praised by the New York Times and Village Voice for her “vivid” and “soulful” musicianship, Ms. Rhodes has performed solo, chamber, and orchestral concerts around the world. Jennifer holds Doctor of Musical Arts and Master of Music degrees from The Juilliard School and a Bachelor of Music degree and Performer’s Certificate from the Eastman School of Music. Currently, she is Adjunct Assistant Professor of Bassoon at the University of Utah and has previously been on faculty at Rhodes College in Memphis, TN. She has recorded for the EMI, Furious Artisans, and Naxos labels.